Meet the man who is giving hope to beardless Indonesian guys

While hair styles come and go, there is something about beards that remains eternal. Long considered a sign of masculine virility, they are also encouraged for men in the Muslim faith. Those two factors, in combination with a global boom in the trendiness of beards, has led many men in Muslim-majority Indonesia to fall for the facial hair trend in recent years.

But, like the males of many other Asian countries, men in Indonesia are genetically predisposed against being able to grow full facial hair, meaning many have been forced to settle for wispy whiskers instead of dense follicular foliage.

That makes the country an especially alluring target market for facial hair growth products. Many Indonesian men are familiar with beard oils such as Firdaus, which came into prominence even before the turn of the millennium, and more exotic hair growth promoting products from the the Middle East and India.

More recently, Malaysian Instagram celebrity Wak Doyok was able to parlay his impressive facial hair into big bucks by coming out with his own all-natural beard growth cream, which has also become hugely popular in Indonesia.

But that stuff is for amateurs. For those who are truly serious about growing a great beard, there’s minoxidil. The chemical, which is intended to prevent hair loss and/or promote regrowth, has also been hailed by many a former baby-faced Indonesian as the solution to all of their problems. Online sales of the substance are booming in Indonesia and there’s one person you can point to behind that.

Mister Brewok strutted into the room with an air of confidence about him – whether that’s mainly because of his impressive full beard or that he’s already a successful online entrepreneur at the age of 23 wasn’t clear at first.

But, as his alias (which translates to Mister Beard) suggests, it soon became obvious that the source of his confidence was his face bush.

“I was 20 when I had my first girlfriend,” he said without any hint of shame when he sat down to chat with Coconuts Jakarta about the recent facial hair fad among Indonesian men – even among those who can’t grow beards naturally.

“You might say that’s late. I didn’t date anyone in high school as I’d always get rejected.”

Fariz never would’ve grown a beard had it not been for the very supplements that he sells. He said he has wanted to grow a beard ever since middle school and he tried all sorts of local supplements – all of which failed. He was about to give up, but he told himself that he would give one last product a try, and that if it didn’t work he would be consigned to a clean-shaven look for the rest of his life.

That product is produced by US mega retailer Costco’s label Kirkland Signature and contains minoxidil, which is only marketed for use on hair, not beards. But after extensive online research, Fariz concluded that it was possible to use the chemical to grow facial hair from zero using the chemical, even for people who are not genetically predisposed to growing full beards such as himself.

It worked. Since Kirkland Signature’s minoxidil isn’t available in Indonesia, he ordered it online from the US. He says he grew the full beard of his dreams after four months of regularly applying minoxidil to his face. A month later, he finally had a girlfriend and soon began his new business venture.

Fariz’s friends soon began to notice the obvious difference in his appearance.

“I didn’t want to admit it at first because I was embarrassed for people to know that I’d been using supplements. I told people I was genetically predisposed to growing a beard, and that it had just started to grow,” he said.

But a couple of his close friends knew of his secret and word quickly spread. That turned out to be a blessing for Fariz because soon his friends on campus were jostling to buy the US-imported minoxidil from him.

Fariz saw a golden business opportunity and ventured into the world of online entrepreneurship, creating Mister Brewok in January of 2015.

“Whatever’s trending in Hollywood and among soccer players, that becomes a reference point for Indonesian men. For example, who among the top soccer players – except Cristiano Ronaldo – doesn’t have a beard? There’s [Lionel] Messi,  [Sergio] Ramos. In Hollywood too – like Wolverine in the film Logan. John Wick has a beard too,” he theorized.

“Beards are so in right now.”

For Fariz, his social media presence has been the key to making Mister Brewok stand out amongst his competitors.

Mister Brewok currently has 31,000 followers on the chat service Line, as well as a Youtube channel containing tutorials on how to use the products his company sells. Mister Brewok’s Instagram page, which currently has 24,000 followers (which Fariz said are all real accounts, not bots), is neatly organized and looks very professional, with many posts not only showing photos of his products but also countless testimonies from satisfied customers, many of whom share convincing before and after photos. 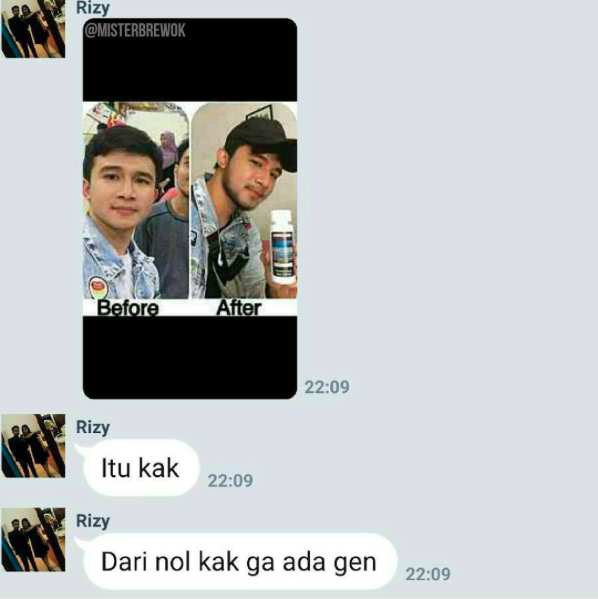 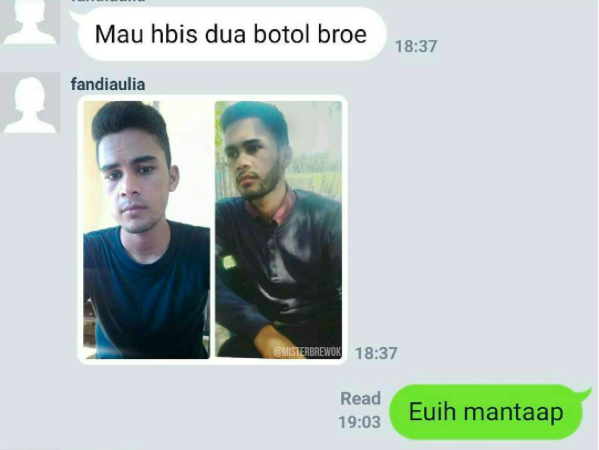 Adri Prastowo was perhaps not as obsessed with growing a beard as Fariz was – not that he was able to, anyway. One day, he came across Mister Brewok on Instagram and felt challenged by Fariz’s now famous slogan: “Why buy facial hair growth supplements from someone who can’t grow a beard?”

On February 2016, Adri ordered six bottles of minoxidil, each of which costs Rp 150,000 (approx. US$ 10) from Mister Brewok. He routinely applied the supplement on his face until July, after which his face bush became so impressive that he was invited to appear in a video interview for Mister Brewok’s Youtube channel to talk about his beard growth success.

“I didn’t expect the beard to grow so fast on my face. No one in my family has a beard – even my father only has a moustache,” he told Coconuts Jakarta.

Now, Adri enjoys a somewhat modest celebrity status on social media. After appearing in many of Mister Brewok’s social media posts, Adri is often mistaken for Mister Brewok himself, and even Fariz has thought about making Adri the official face of the business. Adri has since created an Instagram page with the handle @sayasibrewok (translates to “I am the bearded guy”) dedicated to documenting his impeccable symbol of manhood.

Fariz hopes he can run his business forever, and is ready to fully commit himself to Mister Brewok. But, of course, Mister Brewok’s success heavily depends on the longevity of the facial hair fad in Indonesia.

Some have predicted that the beard’s global resurgence is fashionability is fast coming to an end. But Muhammad Fadli Amran, owner of Joe’s Barbershop chain in Jakarta, doesn’t think beards are going anywhere soon. He said his barbershops are routinely stocked with all things essential to beard growth and maintenance, such as beard pomade, oil, and wax.

“Lately there’s also been a decent increase in the sale of these products,” Fadli told Coconuts Jakarta.

As long as there’s a demand for his products, Fariz said he’ll continue shoving money into Mister Brewok and reap the rewards. In the near future, he’s got plans to launch an app, as well as hold gatherings with his customers to help them use his products the right way for optimal results.

“Now when we go to malls, we can see that beards are no longer that rare. That makes me proud, even though I may not be directly responsible for their beard. But sometimes I meet people in public who recognize me, and they tell me that they can grow a beard because of me. That makes me really happy.”