In Transit: The invisible lives of Singapore’s transgenders

Squirrelled away in the fairly unremarkable estate of Marsiling lies Old Woodlands Town Centre, a once gloriously bustling locale in the ’70s and ’80s — but now it exists as a sleepy ghost of its past, a transitional area for those heading across the borders through Woodlands Checkpoint or an eating spot filled with relatively inexpensive yet alright hawker food.

Look across the shabby red-bricked walls of the abandoned Shaw Brothers cinema and you’ll see a nondescript park. Don’t be fooled by the usual trappings of a park — there’s nothing that exemplifies “greenery and ambience” round here. It must have been a pretty place back then (complete with a lake and shelters of the oriental aesthetic) but today the forgotten park mostly serves as a centre of night-time activities.

Shady? Most definitely. Our visit to the dimly lit park garnered a most homely welcome, what with a teenage couple trying to be discreet while rubbing their crotches together behind a balding shrub, a group of tattooed youths who wanted to mug us in a hut with phone numbers on the walls, and the lone men scouring the park anxiously ‘looking’ for something. On any other day, we would’ve gladly brought our fishing rods and tried to catch whatever creatures swam in the depths of the stagnant, murky lake but on that night we were angling for something else — the chance to talk to the transexuals who seem to favour this suburban town park as a spot to hang out, and find out more about the troubled conditions they face living in Singapore.

What we found that night was a fiercely private and closely guarded community. With all the hooting signals (to warn of our presence), shifty eyes and tight-lipped responses (“I’m new here, I don’t really know anything”), we knew we weren’t going to get anything from them.

And we don’t blame them. Later on we got to know that a certain major newspaper had written up a drivel expose about the park, taking indiscriminate pictures of the transgenders innocently hanging out at the park and publishing them without explicit permission — ruining potential employment opportunities due to unwarranted association with the other unsavoury activities going on at the park.

Like in most countries, transgender individuals here are prone to the debilitating discrimination that prevent them from a comfortable, ridicule-free life. This predilection towards dehumaniation begins from young. Vanessa, a project co-ordinator at Project X, an advocacy group for sex workers’ rights in Singapore, explains that the lack of a comprehensive anti-bullying legislation in schools has prevented the recognition and the appropriate education on gender identity and sexual orientation. Due to the overwhelming exposure to bullying and shaming, many transgender people find difficulty in performing well in academic studies, and some have even chosen to leave schools to break away from harassment.

This life-long handicap, an unwanted bonus that arrives with being transgender, is quantifiably more so in the Asian context says Daniel Kaw, founder of SgButterfly, an online portal dedicated to the support of Singapore’s transgender community.

Furthermore, a large portion of the Asian community still view transgender people as outliers — more object than human. Kaw notes that misinformed portrayal of transsexuals as ‘entertainment’ continue to persist in the region, remarking that they’re not being helped by the various cabaret shows in Thailand, rampant labels such as ‘Shemale’ and ‘Ladyboy’, and of course, the visibility of transsexual sex workers at Changi Village and other secluded areas. “Many think that transsexuals — especially those transitioning from male to female — want sexual pleasure all the time, hence their unfair reputation”, he says. It’s something that should see change, especially in this modern era of progressive acceptance.

But like change, acceptance takes time. Through an informative chat with Coconuts, Neha Nicole Hussin reveals did she did not have it easy when she was growing up. Born Nehar Husin to a Muslim-Pakistani family, Nicole’s self-discovery and her lack of identification with her gender met with disapproval. When she went through surgeries to rectify her appearance, her father disowned her and placed her in the Singapore Boys’ Home for two years. “My freedom was taken, and so was my dignity. My suicide attempts have been countless, but I knew that it would not make me happier,” she recounted.

While her family was not capable of accepting her confession initially, she had the supportive company of friendships she made along the way, as well as the help of organisations such as Pinkdot and the T-project group. Through them Nicole felt she could speak to people who could understand the daily grind experienced by a transgender.

“Being able to finally be the woman that I’ve always wanted to be was the greatest accomplishment and highlight I have made so far. I believe that you can’t live from day to day lying to yourself. The power to choose not to go along with society stereotypes is overwhelming,” Nicole says in retrospect. Some of the challenges Nicole has faced on a daily basis have to do with employment. “People tend to stare at me and scream nasty things at me while walking and sometimes try to start a fight with me,” Nicole revealed. “When applying for jobs I almost always get the boot for telling the employer I am a transgender, and even if I do get the job, people at work always give me the extra workload and they seem so condescending around me. It’s so unfair. People in general seem to think that trans people are harmful and an outcast like we are in some kind of caste system and severely look down upon us.”

It is this kind of harmful mindset through the lack of anti-discrimination legislations and the prevalence of transphobia amongst many employers that drive trans women into sex work, Vanessa remarks. “Sex work remains a good opportunity for many trans women as it provides them with financial stability as well as peer support from other trans women in the industry,” she observes. “That said, there are many other factors that encourages trans women to join sex work — it will be an oversimplification to suggest that there is a singular reason.” Project X has been hard at work fighting for the right for sex workers’ rights to respect and dignity in Singapore, more so for transsexual sex workers, who they believe face double the level of discrimination due to their gender identity and expression. They’ve even included an extensive guideline to be a ‘trans ally’ on their website.

Kaw notes that legitimate employment is definitely a lot harder for transsexuals here. The lack of academic education is an especially prevalent issue among the transgender community; so in addition to being physically presentable, many have found it hard to find decent jobs with inadequate qualifications, especially in the paper-chase environment in Singapore. The lucky ones end up in the fashion, hairstyle or the cosmetics trade.

Times however, are a-changin’. “The issue of education has been something of the past,” Kaw remarks. “We can see in recent years, those between the age of 15 — 25 are ensuring themselves to be better equipped with good education. They can then get themselves into a better career in order to earn their keep and plan for their sexual reconstructive surgery”.

The long road to mainstream acceptance in Singapore however is still paved with rocky barricades. But slow progress is still progress, and it’s stories like Nicole’s along with the tireless advocacy and support effortsthat help shed light to the silenced hardships the transexual community face daily. Like everybody, they simply want to be seen as fellow human beings, deserving of the right to be equally respected no matter their sexual disposition. 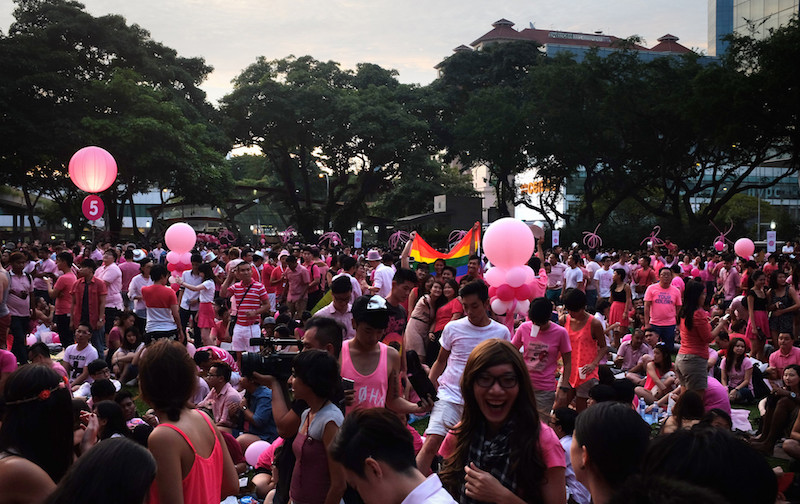 “I strongly believe that our LGBT community is not getting enough support and awareness. Which is why I think that we are always frowned upon. I would love to see the LGBT community taken out of the dark and allowed to collaborate and take part in mainstream society and treated with respect regardless of what our sexual orientations are,” Nicole asserts.

“We are supposed to be united as one. We must also be given the same rights as to marriage and equality. Transsexualism and homosexuality is not a phenomenon, it’s a collective choice we were predisposed to have.”