Being single doesn’t have to suck this time of the year. Think of it as total freedom: no one is nagging you to come home early, you’re not required to engage in mushy shit, you’re free to drink as much as you want, and you can pursue your bachelorhood to the maximum. That said, here are Metro Manila’s best girly bars.

CLASSMATE DIGITAL KTV
1012 Quezon Avenue, Quezon City; +63 2 3731080, +63 2 3731156, +63 2 3731160
Open 6pm till late
The humongous signboard should give it away: Classmate offers none of the stuff you hated about school. We’re talking about girls in uniforms who might just be willing to “cut class” and do an impromptu karaoke duet with you inside their science- and math-themed VIP rooms. Physics? Chemistry? Algebra? Choose your, um, favorite subject.
Minimum budget: PHP500 for common area; PHP3,500 for VIP
Discreet parking: Basement parking limited
Expert tip: Practice extra caution going here during mall hours; friends and relatives dining at the opposite Fisher Mall could easily spot you.

AIR FORCE 1 DIGITAL KTV
Citi Mall Bldg, 888 Ninoy Aquino Ave, Paranaque City; +63 2 8201928, +63 2 8201937, +63 2 8207250
Open 6pm till late
One of the more high-end gentleman’s clubs in the Metro, Air Force 1 is probably the roomiest and most expensive. It is known for its quality roster of ladies — “flight attendants,” as they are called — and is not coincidentally located near the airports. Picking up someone from NAIA and need to kill some time? You know where to go.
Minimum budget: PHP700 for common area; PHP10,000 for VIP
Discreet parking: Available, around the Citi Mall compound
Expert tip: For more privacy, you may go to Flight 168, aka the spa downstairs.

GENIE MAGIC KTV
4/F & 5/F, Paragon Square Bldg, VV Soliven Street, Imelda Avenue, Cainta, Rizal; +63 2 682 2027-28, +63 2 678 8738-41
Open 7pm till late
Due to its secluded location, Marcos Highway has long been a favorite adult entertainment spot among more cautious night crawlers. Make a quick right on the corner of Sta. Lucia East mall and you’ll stumble upon Genie, positively the least seedy offering this side of town. The place boasts 30 KTV rooms and a number of fine-looking “princesses,” all eager to grant you more than just three wishes for as long as your credit card can handle it. An FYI: Genie is a sister company of Pegasus and Heartbeat.
Minimum budget: PHP500 for common area; PHP3,000 for VIP
Discreet parking: Available at an open lot beside and across the building.
Expert tip: Keep an eye out for their Harem Nights — a monthly special where the girls engage in a dance showdown at the main hall, and with freebies and raffle prizes at that. HEARTBEAT MEGA KTV
357 Quezon Avenue, Quezon City; www.heartbeat.ktvphil.com
Open 5pm till late
Another one of the classics on the Q-Ave row. Heartbeat first gained popularity in the ’90s as Heartbeat Mega Disco, and later made the jump to KTV superbness. And that’s how the well-loved Heartbeat Sweethearts, its in-house roster of girls, were born.
Minimum budget: PHP500 for common area; PHP5,000 for VIP
Discreet parking: Limited, valet parking offered
Expert tip: It’s Heartbeat’s anniversary on the 20th of this month, and they’re giving away a — drum roll, please — 51-inch TV!

STARWOOD VIP LOUNGE
Edsa Extension, Pasay City; +63 2 8360318
Mon-Sat, 8pm onwards
Starwood offers Vegas-style entertainment, with fly-in Russian models to keep you company through the cold, cold night. Expect pole-dancing numbers in lieu of the dated, cheesy power-ballad dance routines you typically see at dingy girly joints. Also, Starwood is the only place in the country where it’s easy to ask a white girl to do a lap dance for you. (In all other circumstances, you wouldn’t have the courage to even chat one up.)
Minimum budget: PHP1,500 for common area; PHP5,000 for VIP
Discreet parking: Limited, along EDSA
Expert tip: The place offers special packages for bachelor and birthday parties. Plan ahead!

DARKBEAT KTV AND DISCO
Marcos Highway, Bgy. Mayamot, Antipolo, Rizal; +63 2 6463719
Open 6pm till late
For those who want to keep a low profile or are looking for something with a hint of old-school Pinoy nightclub grit, Darkbeat is your best bet. Performances here range from the cheeky (girl groups dancing off beat) to the absurd (think beer bottles and cigarettes as onstage props). Still, Darkbeat is a lot classier than those shabby beerhouses in the alleys of Cubao.
Minimum budget: PHP175 for common area; PHP1,500 for VIP
Discreet parking: Limited, along Marcos Highway
Expert tip: Don’t know any floor managers to help sort things out for you? Just look for one “Mommy Rose.” \ 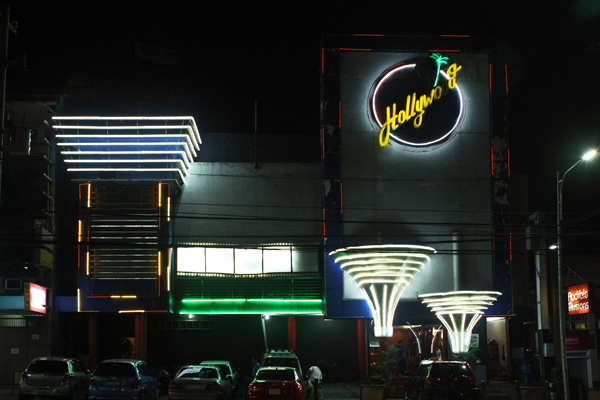 HOLLYWOOD
Timog Avenue, Quezon City
It’s that lively looking hidey-hole rumored to be owned by a famous athelete and his patron. Make the right turn from the roundabout on Timog and it won’t be hard to notice the flashy neon signage plastered on the façade of Hollywood. It’s awesome inside as it looks from the outside — and we’re not even talking about the people working inside.
Minimum budget: PHP500 for common area; PHP3,000 for VIP
Discreet parking: Limited
Expert tip: Load up on food and booze at the nearby Dampa and save a few bucks. 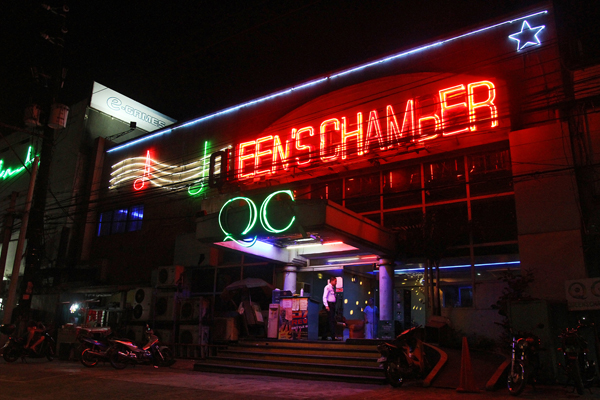 QUEEN’S CHAMBER
Quezon Avenue, Quezon City
Open 6pm till late
Casually referred to as “the bar beside Heartbeat,” this girly joint deserves its own accolade. By being one of the most budget-friendly haunts in the area, Queen’s Chamber attracts a relatively young working class clientele. Expect the place to be packed on paydays.
Minimum budget: PHP200 for common area; PHP3,000 for VIP
Discreet parking: Limited, valet parking offered
Expert tip: Parking is really hard to get by here, so carpooling is recommended.

EAST ASIA
57 Roxas Ave cor Dapitan Street, Bry 6, Pasay City
No frills, no gimmicks; just a bunch of women serving up the girlfriend experience. East Asia is the most viable option if you’re stuck in the Pasay-Manila area and looking for fast love.
Minimum budget: PHP300 for common area; PHP3,000 for VIP
Discreet parking: Available
Expert tip: There’s a non-consumable cover charge of PHP300. Make friends with your floor manager to have it waived. PEGASUS
Quezon Avenue cor Scout Chuatoco Street, Quezon City; pegasus.ktvphil.com; +63 2 7253727
As old as time and just as legendary as the mythical creature it’s named after, Pegasus has served generations of titos and lolos; just ask your uncle and he probably has a euphoric Pega anecdote to share. Well, it’s still here, and still remains one of the top gentleman’s clubs around. You have their topnotch lineup of Peggy Sues to account for that.
Minimum budget: PHP400 for common area; PHP5,000 for VIP
Discreet parking: Limited, along Quezon Avenue
Expert tip: Every PHP5,000 bill entitles you to one raffle coupon where you can win a London vacation for two. Isn’t that, uh, tempting?