A pixelated penis sprouting from a blue wall is making the rounds online this week after the naturally occurring phenomenon was discovered inside a bus terminal bathroom.

Thanayut Nimnuan’s close encounter with an active glory hole seized the public’s imagination this week after he shared his experience inside the Chaiyaphum Bus Terminal, located in the province’s northern district of Phu Khiao.

“Apparently people with tiny ‘birds’ still want to show them off,” he added in the now-deleted post.

Local residents and commuters that frequent the terminal confirmed Thanayut’s story to Thairath newspaper, explaining that others had also witnessed the peep-o-penis inside both the women’s and men’s bathrooms. They told reporters it wasn’t even the first reported wall wang sighting of the week.

Apparently the mystery sausage seller wasn’t looking to complete the transaction, as after poking his pecker through the roughly one-inch hole, he’d quickly withdraw it and run away. 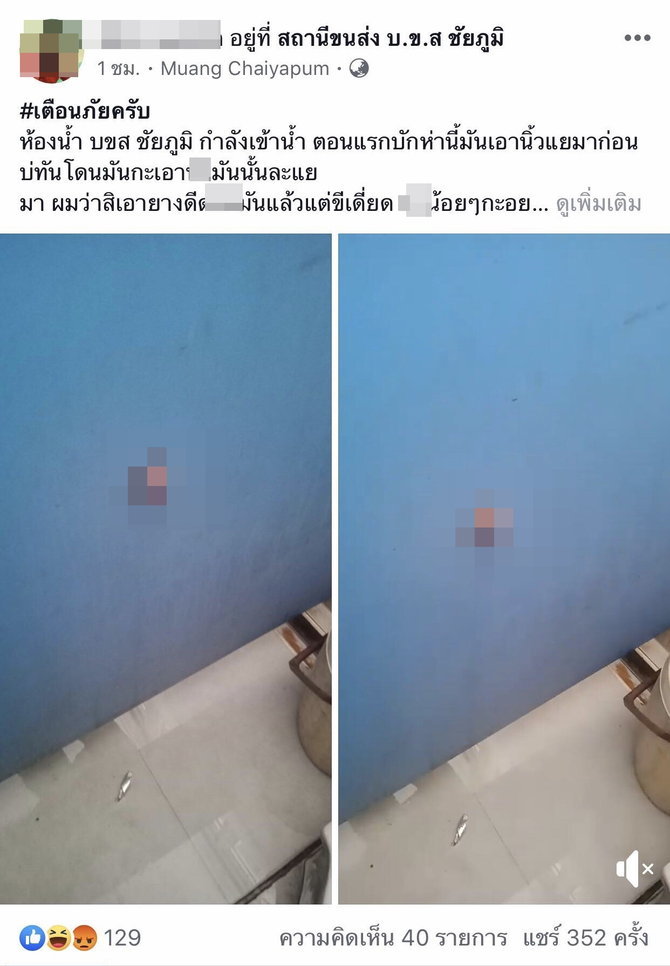 Witnesses don’t believe the man is from Chaiyaphum but rather a commuter who passes through regularly. They want the authorities to stop the mystery man’s surprise schlongings.

As of publication time, the pervy perp has not been identified. Someone answering the phone Thursday afternoon at the Chaiyaphum City Police Station said they’d received not formal complaints on the matter.

This is not the first time gloryhole encounter has documented. Last September, a creeped-out victim took to Facebook after a peeping tom poked their head into a mall bathroom stall and groped his leg suggestively inviting him to participate in some gloryhole fun.

Meanwhile tuk-tuk driver Thanayut said he was a bus station regular until the incident, which has forever put him off from its troubling toilet.