Get COVID-19 without installing Thai tracking app and go to jail: task force

Update 3:40pm: Yeah, no, health minister Anutin Charnvirakul walks back threat, says no one will be prosecuted for not using the application.

Anyone who contracts with COVID-19 and hasn’t downloaded the government tracking application to their smartphone faces prosecution, the face of Thailand’s pandemic response said today.

While announcing another 305 infections – down over 20% from yesterday – the COVID task force’s Taweesilp Wissanuyothin said it’s mandatory for people to download a weeks-old app that monitors their whereabouts at all times.

Those who don’t install the government-made Mor Chana (“Doctors Win”) app and are infected with the virus will be deemed to have violated the Emergency Decree and face two years in prison and a THB40,000 fine, he said.

The assertion was widely criticized by those who said downloading an application is not practical for everyone, especially those without smartphones.

“This kind of regulation will only harm the people, especially the poor and people who don’t have a smartphone,” activist-turned-MP Rangsiman Rome wrote. “We shouldn’t prosecute anyone just because they don’t have money. The government should make things easy for all people, not force them to struggle for the sake of their own convenience.”

Former IT minister Surapong Suebwonglee also weighed in, expressing concern that the threat would discourage people from getting tested for COVID-19.

“From now on we’ll see high-risk people who are asymptomatic or show only minor symptoms avoid testing for COVID-19 because they’re afraid of being jailed, and they’ll continue to live normally in their community,” Surapong tweeted. “People have been hurt enough. Stop punishing people!”

Of today’s 305 new cases, 193 were local transmissions, and at least 39 new cases were found in Bangkok. Another 109 migrant workers were found to be ill.

The death of an 88-year-old man, the nation’s 67th confirmed fatality, was also announced. He contracted COVID-19 from his son, who had been to “risky places” in Rayong province. He did not go into further detail. The coastal province, which has reported hundreds of COVID-19 infections in the past two weeks, many linked to illegal casinos, is among five provinces to ban people from leaving without government permission.

The Mor Chana application is available for iOS and Android. It differs from the Thai Chana (“Thailand Wins”) application released last year by using GPS and Bluetooth to track users’ locations. Health officials say it will notify users of the relative risk – green (clear), yellow (low risk), orange (risky) and red (high risk) – of the locations they have visited. 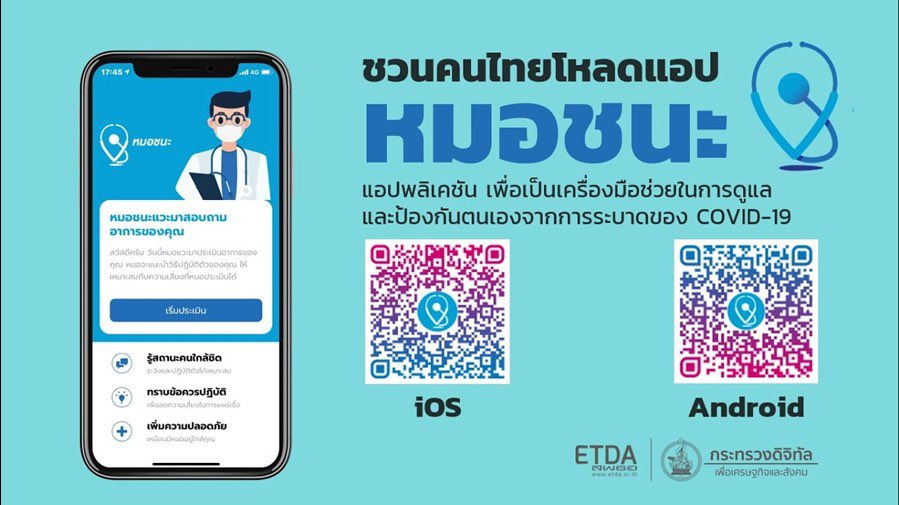 Correction: Due to a change in our tracking methods, an earlier version of this story miscounted today’s fatality as Thailand’s 68th. It was in fact the 67th.