Coffee and Coffins: Bangkok’s death-themed cafe brings awareness to the end of life

Kid Mai Death Awareness Cafe is serving up more than just lattes and smoothies. This new cafe in Bangkok, founded by Professor Veeranut Rojanaprapa, offers philosophy classes in one corner, desks where you can plan your funeral in another, and a casket that you can climb inside to get a discount on a cappuccino. The new cafe has been featured extensively in Thai media. Unfortunately, those looking for a kitschy cafe experience may be in for a letdown.

As Dr. Veeranut said to us, the cafe is more of a “life-research exhibition” than a coffee spot. In Thai, “kid mai” means “rethink” and the founder said, “we don’t want to focus on coffees or drinks, but the results of our research.” That’s good because, on a recent sleepy Sunday afternoon, the coffees we ordered never arrived and there was no food for sale.

There were less than 10 people sipping coffee at the cafe. There were skeleton cookies on display but staff members said they were not for sale. We ordered our drinks, and 15 minutes later, they had not yet begun making them and could not tell us how long it would be.

I had a fleeting thought that the cafe not delivering food and drink might be part of a lesson they were trying to teach about expectation and worldly attachment, but I think they are actually just a little disorganized.

Since it was very hot in the open air cafe, we canceled our order and later celebrated life by getting iced lattes up the street at Casa Lapin. Though we did not end up trying anything from Kid Mai, the menu did feature on-theme names. The espresso is called Last Day, an Americano is called One Week Left, Six Month is a cappuccino, and One Year Left is a latte. All sell for THB55 (US$1.76) hot and THB65 (US$2.08) cold.

The imaginatively-named frappes are called Born, a fruity concoction, Elder, a tea-flavored drink, Painful, featuring a red sauce resembling blood, and Death ll, a dark chocolate frozen treat. These sell for THB140 (US$4.31). The cafe is the former home of Ari’s Banana Family vegetarian food court, it’s large, bright, and sunny — not especially creepy. It does feature the coffin, three desks for writing out your funeral rites, and a skeleton — but it’s mostly white tables and chairs with no decoration. You could easily not realize you were in the death awareness cafe and think you were just in a food court with some random stuff in the corners. The founding professor has been a longtime student of dharma teachings and researcher on related topics at Baan Aree Foundation. He has also run an education center for the elderly, called Baan Pun Rak Association, that helps older people become aware of their impending death and come to terms with it. In one corner of the cafe is a large sign with a photo of an older Western couple jumping in the air, the text translates as “Always be happy at your own age.” The educational classes on a variety of end-of-life topics at Kid Mai cafe are free and taught by monks. For Dr. Veeranut, the purpose of the cafe is to bring death awareness to everyday life in hopes that the knowledge will lead people to live better, richer, more giving lives. For Bangkok youth, he knew that much of everyday life happens in cafes. “Spending time in cafes is the symbol of a new generation, they love to be freelancers and do online work in cafes,” he said. So, he thought, why not reach this audience in a place where they feel comfortable?

“What makes this cafe special is not only that it’s unique or strange but it’s purpose,” said the Buddhist cafe owner. “When one is aware of their death, they will decrease greed and anger and hurry to do good.” He believes that, “If everyone is aware of death, our world will be better, crime will decrease, transparency will improve. Although some young customers may come in because of social trends, when they try our coffin, they think about the value of life. After they get out of the coffin, almost all of them write their promise to change their life for the better in our prepared book.” Perusal of some of the completed “design your own funeral forms” available in the cafe revealed interesting ideas from the customers. A woman named Mataika allocated THB50 million (US$1.6 million) for her final rites, requesting lilies and white roses for decoration and a “vampire wedding gown” as attire. Refreshments would include Pepsi and the Korean snack tokbokki for her mourners. 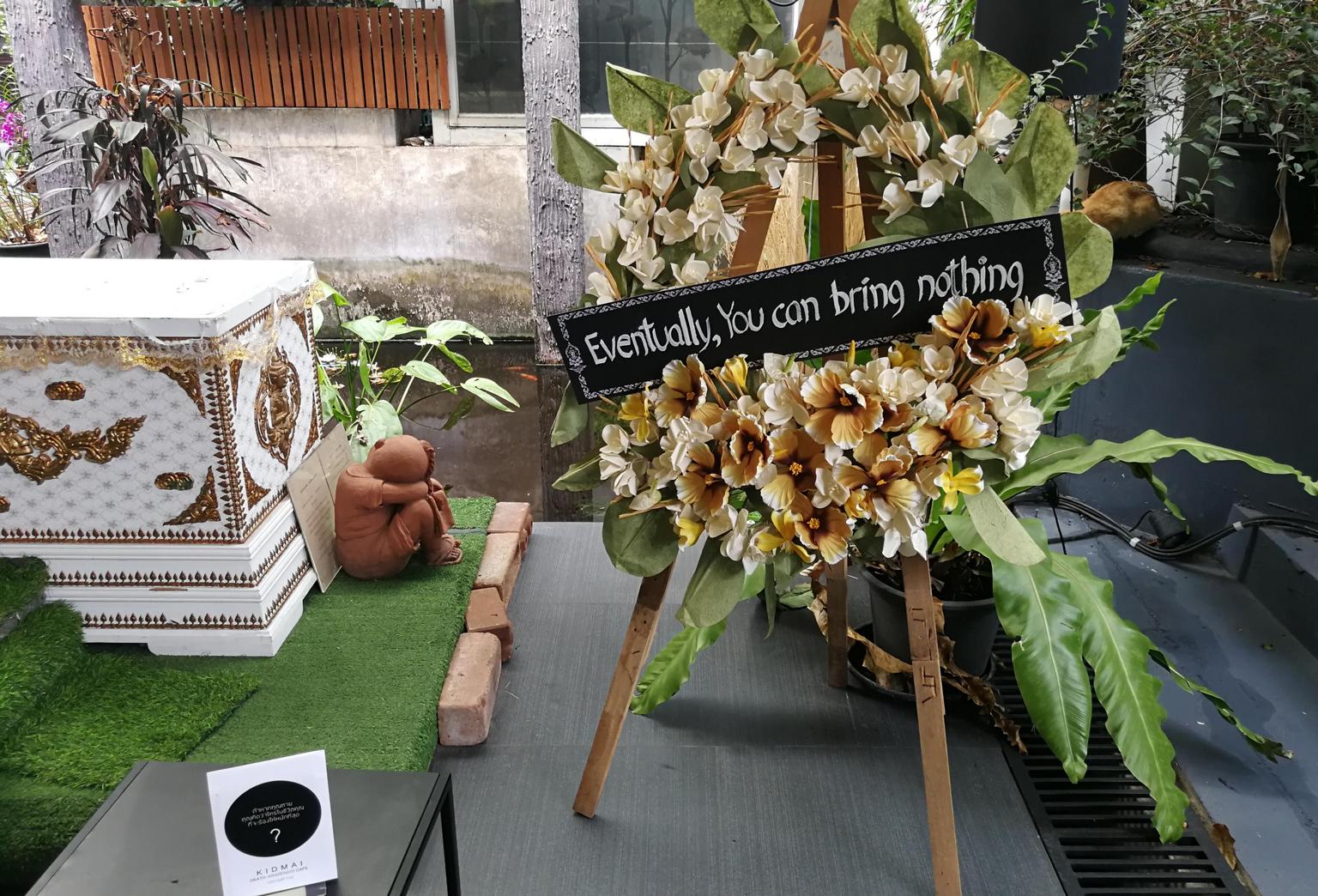 Charinthorn asked to be outfitted in a white shirt and trousers and advised that THB100,000 (US$3,202) should be spent on his funeral. He wanted to be surrounded by trees and to send his mourners home with K-pop souvenirs after serving them a shabu shabu dinner buffet. After being cremated, he wanted his ashes scattered in the Chao Phraya River near Tha Nam Non pier. Dr. Veeranut plans to keep the cafe open for a few years, in hopes of bringing awareness to his ideas and igniting visitors to appreciate life through the awareness of death.

Love theme cafes? Check out these other Coconuts stories: