A curious new trend has emerged in Bangkok, where young Thai men are identifying as “Mexican gangsters.”

On the outside, many of these Thais resemble the Cholos who inspire them. Their clothes, tattoos, and hairstyles emulate those sported by real homies. That said, tattoos and bling do not a gangster make. When Coconuts interviewed members from three of these “gangs” – Balcony Pain, Fratez and D Sixty – we found out that none of the men appreciated the brutal violence that is often associated with real Latino gangs like the Latin Kings.  Moreover, most only had a shallow understanding of the foreign urban culture and Mexico in general.

What became clear is that the Thai obsession with these groups is simply an appreciation of their aesthetic. All of the men we spoke with were captivated by “the clean and simple style” that “worked well in this (Thai) weather,” as one gang member said.

Perhaps what most separates the Thais from the Mexicans they imitate is that almost all of them hold innocuous 9-5s as teachers, policemen and bureaucrats. Many are family men, and some admitted to consulting their wives before getting certain tattoos. 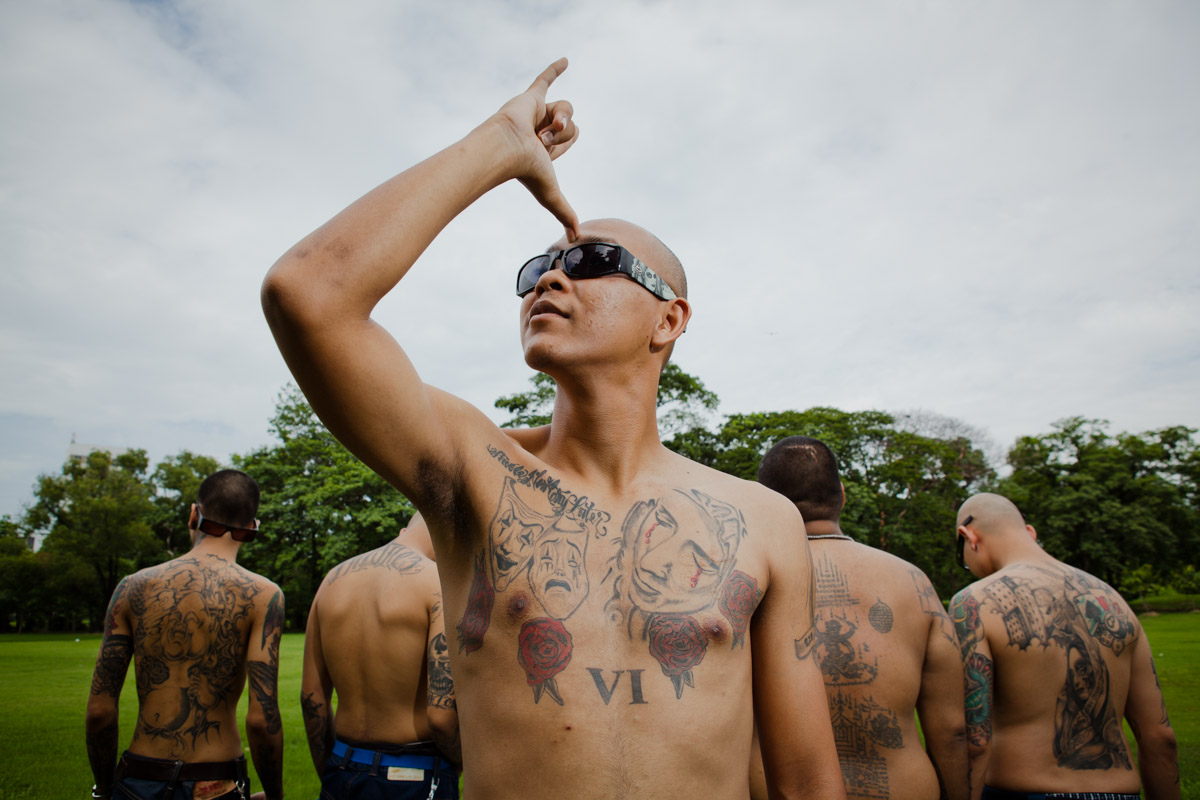 Needless to say, the Thai gangs don’t fight amongst themselves or deal in illicit drugs, both of which are hallmarks of real Latino gangs. In a nutshell, this is a brotherhood of style-conscious men who bond over baggy white shirts and gothic-baroque tattoos.

That’s not to say that the Thais don’t have an understanding of the fierce take-no-shit Cholo attitude. Thanks to Youtube and movies they’re very much aware of that culture’s hyper-aggressiveness and machismo. One Balcony Pain gang member – Mr. Shiro Local – bared his inner gangster to us when he rapped a few lines from an original song he had written called “Fuck the Popo” in which he compared corrupt Thai police to parasites in his scrotum.

Such outright vitriol is rarely directed towards people in authority in Thailand, where the dominant culture is one of extreme deference towards the powerful. Yet, you’d be hard pressed to find Thais who disagree with Mr. Local’s assessment of Bangkok’s cops. Perhaps a little more Mexican gangstah chutzpah is exactly what Thailand needs. Get fresh Coconuts delivered to your inbox! Subscribe to our newsletter for a chance to win a marvelous Coconuts hat.

One thought on “Bangkok’s ‘Mexican’ Gangsters”