As everyone who’s been in Hong Kong during the Rugby Sevens can attest, the entire three-day-affair is something of a pissup, whether you’re at the stadium or not. For non-pissheads, a pissup is a term used commonly in Britain and Australia to mean a no-holds-barred drinking session.

Unfortunately, one alleged Sevens punter seems to have taken the colloquialism rather literally, as demonstrated by his crawling into an actual urinal, actually (okay, probably) pissed.

We have not been able confirm when or where this was taken, but we were told that it was snapped either yesterday or today’s rugby festivities. Edit: Local netizens have been sharing this photo under the assumption that it was taken at the Hong Kong Rugby Sevens, but according to one sharp-eyed Coconaut (and multiple Redditors), it’s actually likely that the photo was taken in South Carolina, in the United States. 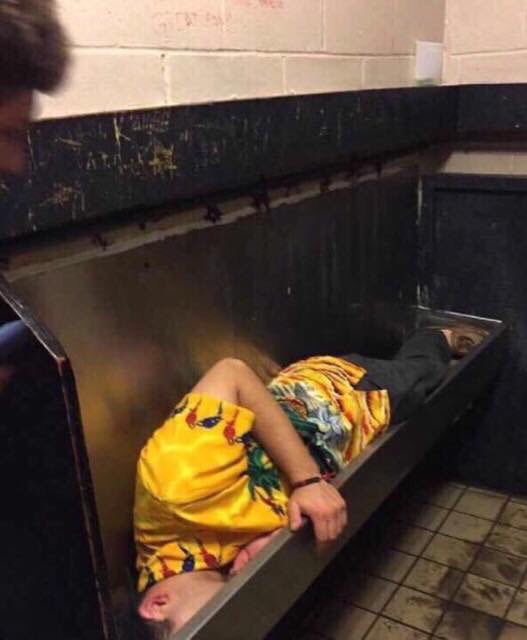 We can only imagine what his friends were jeering at him (while mercilessly snapping away, as true friends do). “Bit bladdered mate? Bit pissed, are you? You pisshead,” etc., would be our best bet. We’ll stop with the piss jokes when it’s not funny… so never.

We wonder if the man had simply had enough of all the warm cups of urine being thrown from the top of South Stand (if you’ve been in South Stand, you’ll know about the pee missiles. Pissiles?) and tried to camouflage himself Predator style. Who knows? Drunk logic is weird.

If the photographer, subject, or anyone else has any information on the full context of this photo, do get in touch – we have so many questions. For example: Was it an accident? Was it a dare? Was his shirt originally white?