In northern Kowloon lies Wong Tai Sin, Hong Kong’s only fully landlocked district. This largely residential swathe of land features two major religious tourist attractions: Wong Tai Sin Temple, from which the district derives its name, and Chi Lin Nunnery. The former, a sprawling Taoist complex, plays host to thousands of worshippers on the eve of Chinese New Year, as tradition dictates that incense offerings made earlier in the lunar year will bring more luck. Who knew deities had a first come first serve policy, eh? Just a stone’s throw away is Chi Lin, a serene Buddhist nunnery, with beautiful lotus ponds, a tranquil teahouse, and even a secluded vegetarian restaurant hidden behind a waterfall. Incredibly, there isn’t a single nail in any of the buildings dotted around the nunnery’s extensive grounds, as all 16 structures were handcrafted out of interlocking pieces of timber. Wood you look at that! Almost as iconic, but in more of a pop culture kind of way, is Choi Hung Estate. Whilst Wong Tai Sin isn’t exactly lacking in housing estates, Choi Hung sets itself apart from the others by being rainbow-bright (literally, seeing as Choi Hung means “rainbow”!), with a pastel-hued basketball court that’s become a favourite spot for local shutterbugs.
read moreread less
RECENT ARTICLES IN Wong Tai Sin If the plethora of “expectations vs. reality” memes have taught us anything, it’s that applying an Instagram filter and boosting a photo’s saturation can... It’s one of the world’s best metro train networks in the world, but the world’s got its creeps, and the MTR is no exception. A 37-year-old man was arrested... 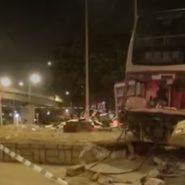 YouTube, depository of all earthly wisdom, fails footage, and cat clips, is great for learning, but it has its limits. While online tutorials can help you perfect scrambled eggs... We had patient zero. Now authorities have another. Just a few months after Hong Kong discovered the world’s first-known case of a strain of hepatitis E passing from rats to... An 80-year-old woman who was livestreamed hitting and threatening to kill her Indonesian domestic worker will be placed on a good behavior bond after the charges against her were... Teenagers, right? Give ‘em an inch, and they’ll steal a double decker bus, joy ride around Hong Kong and then smash it into a concrete roundabout. Well, allegedly, in the case... Though not biggest heist in Hong Kong, a HK$5 million (US$641,000) jewel theft continues to make headlines this week, as the three suspects arrested by police are all primary...

Police last night arrested a 79-year-old woman in Hong Kong’s Wong Tai Sin district after a Facebook live video of her slapping and threatening to kill her Indonesian...