Meet Mui Thomas, a Hong Kong rugby referee with a rare skin condition who hopes to inspire others

Anonymity is not a luxury allowed to Mui Thomas. Wherever she goes, the 22-year-old special needs teacher and rugby referee’s pink, scaly skin attracts stares.

Mui has harlequin ichthyosis, an extremely rare, severe genetic disease that causes the skin to grow very thick, with deep, painful cracks. The name of the disorder itself, “ichthyosis” – which comes from the Greek word for “fish” – refers to the “scales” that cover sufferers’ bodies.

But perhaps the most striking thing that one observes upon meeting Mui is her brazen confidence and energetic persona. She brushes off stares – though they do, of course, bother her – sometimes even offering a smile or a little wave in return.  She speaks boldly and loudly, and talks about her disorder as if it’s an afterthought, or a minor inconvenience, rather than the crippling disease it can be.

She is one of the oldest people in the world with harlequin ichthyosis and the only sufferer in Hong Kong. British woman Nusrit Shaheen is believed to have survived it the longest, at 31 years old. Until recently, Mui and her parents thought she was the only one in Asia; they have now heard of other sufferers in Southeast Asia.

Babies born with the disorder often die in their early childhood without proper treatment. Fortunately, with medical advances – such as topical creams to keep the skin moisturised, and oral retinoids to slow down the growth of her skin cells – chances of survival have improved dramatically, and no one knows how long those with the ailment may live, or even if their lifespans are limited at all compared to the general population. For her daily commute between her home in Sai Kung and her office in Wan Chai,  Mui has to take the MTR and the bus. (May 27, 2015)

As daunting and uncertain these prospects may seem, Thomas is surprisingly blasé about it.

“I never really thought about it myself,” Thomas said, sitting in a café with her parents. “I just think: ‘Well, I’m still here.’”

Tina and Roger Thomas, aged 47 and 52, who adopted Mui in Hong Kong when she was three years old, share her optimism.

“If she maintained good healthcare then there was no reason that she shouldn’t have just as much opportunity as another kid,” Roger explained. “There is every reason that we can hope for the future.” “We’ve also very much instilled in her [the importance of] enjoying the world,” Tina added. “You know, the carpe diem thing. You don’t know what’s around the corner, for any one of us.”

Mui is now a special needs teacher at the Rock Foundation in Wan Chai, and a referee for the Hong Kong Rugby Union (HKRU). She hopes to one day become a rugby referee for international matches, a goal she works towards by moving up the referee hierarchy in the city.

Earlier this year, the Hong Kong Rugby Union gave her the referee award for being “inspirational in overcoming life’s challenges and adversities”. Thomas likes to use her headphones and her iPad to block out the world during her commutes. (May 27, 2015)

But Mui’s happy-go-lucky attitude belies the pain she has endured, both physical and psychological, throughout her entire life.

She gets infections once or twice a month, most of which she manages on her own with topical antibacterial creams. Her body is constantly covered in small abrasions slightly deeper than paper cuts, while she gets one or two more serious cuts a month.

When she gets those, she makes sure they’re covered up, and that she’s “not rolling around in astroturf” as she often has to do during her referee training sessions.

“My parents always tried to distract me from my itchiness and my pain,” Mui later said, remembering her childhood. “Usually they would try to make me laugh, and maybe do some colouring and fun things.”

For that reason her father Roger, who is from Wales, emphasises that Mui’s story is not just about her; it’s about their family. When Mui speaks in public about her experiences – which she has done regularly over the past few years – her parents often share the stage. Her mother Tina, who is originally from Germany, had to endure hardships long before Mui could even walk. 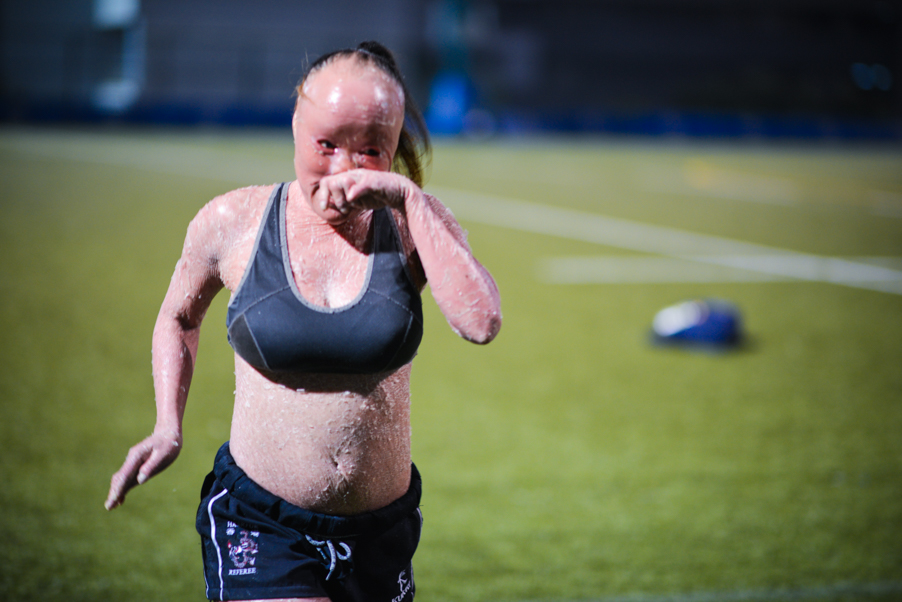 Over twenty years ago, Roger and Tina were living in Hong Kong when they decided to become volunteer foster parents. They had no intention of adopting.

Tina first met Mui at the Duchess of Kent Children’s Hospital in Pok Fu Lam when she was a few months old. The couple would visit Mui every few days, and though she rejected their presence at first, their bond eventually grew stronger and stronger.

But soon they were faced with a decision: Mui was moved to an institution, and Tina and Roger had to act fast.

“She was effectively being hidden away from the rest of society in a home for the mentally handicapped,” Roger said. “She has no mental handicap. Now, we had to make the decision.” Like the rest of the handful of female referees, Mui trains alongside the men. (Feb. 4, 2015)

“There was no reason that either of us should have wanted to adopt. To other people, it didn’t make sense,” he continued.

But they decided to do it anyway. The adoption was finalised when Mui was three years old, and immediately society made an already tough job even more difficult.

“I would say the worst incident when a woman spat in Tina’s face, and accused her of burning Mui,” Roger recounted.

Then there were the medical issues: when Mui was four years old, she got an infection so severe that the doctors had unsuccessfully tried all but one antibiotic. Thankfully, the last one worked.

Childhood innocence shielded Mui from many of these hardships; she was often the centre of attention, and was a confident, precocious child. But when she was 13, Mui was the victim of vicious anonymous cyber-bullying that drove her to suicidal thoughts, with the police having to get involved on one occasion.

“You lose the ability to trust people,” Mui said.

“So for me, school, high school was very difficult. Because everywhere I went, everywhere I turned, I wasn’t sure if the person next to me was nice or not.”

In Year 10, a younger girl at her school decided that she had a “phobia” of Mui, and administrators began to accommodate that student’s demands, asking Mui to avoid certain areas of the school. At the Annual HKRU Referee Dinner, Mui speaks to a woman who approached her to tell her that she’s an inspiration and to ask for a picture with her. (June 6, 2015)

Even now as a young adult, Mui continues to face blatant discrimination.

In May, Mui encountered extremely harrowing behaviour from a minibus driver. He refused to continue driving unless she got off the bus, complaining that she “looked horrible”, made him sick, and that he was going to vomit.

Her fellow passengers rose in her defence, and eventually the driver was fired. Thomas burst into tears while on the phone with her parents, who consoled her by promising her “HKD100 to buy something way too expensive with way too much cream from Starbucks”, according to Mui.

“I got a Birthday Cake Frappucino!” she wrote on her father’s blog. Mui speaks to a friend at the HKRU Annual Referee Dinner while holding the engraved cup she won for being “inspirational in overcoming life’s challenges and adversities”. (June 6, 2015)

Just last month, Mui launched a petition urging YouTube to end “shock videos” after she found a clip, called “15 Terrifying Rare Birth Diseases”, that used photos of her without her permission. It was eventually taken down, and the petition now has more than 1,200 signatures.

“I don’t think I ever really got over it,” Mui said about her early encounters with bullying.

“I think I still do have a bit of a tendency to block things out,” Mui said. ”Because I try to be positive… But, sometimes, it still gets to me.”

“I’m trying to live my life,” she said. “You know, I know I look different. But is it really necessary to look at me in the way that you’re looking at me?” Sometimes, she finds that a simple gesture can help others to see past her appearance. Recently she was on a crowded MTR when a young teen noticed her.

“And he just like, jabs his dad, and starts pointing and laughing at me. And I’m thinking, really mate, really?” she said, in disbelief.

“But I just smiled and waved.”

“The dad caught my eye. And it was almost like he was saying, “Thank you for not coming over and tearing up my son.” Mui sits at her desk at the Rock Foundation as a blind student practices the violin. (Aug. 5, 2015)

After the many cases of Mui being bullied, her parents realised it was time they step into the spotlight, after having shunned interviews with the media for years. They realised that the happiness of their daughter was not solely in their hands.

“There was no way of protecting her without speaking out. And the more people that we talked to, the more we realised that they benefited from hearing our story.”

“People will stare anyway,” Roger reasons, but at least there’s “an opportunity for education” by telling the world about his daughter.

Roger has now written a book, entitled “The Girl Behind The Face”, and is still looking for a publisher.

Since setting up a Facebook page and getting more publicity, Mui says she’s been touched, by example, by people from her past – some of whom she did not exactly see in a good light – reaching out to her with apologies for their previous behaviour. Mui adjusts a piece on some art made by students at the Rock Foundation. (Aug. 5, 2015)

These days, she has people coming up to her on the street and contacting her online to tell her what an inspiration she’s been to them, and though she’s still getting adjusted to the attention, she plans to use her story to help others.

“I hope that people will be more accepting of those with visible differences and with special needs. And know that even though they look different, they’re still people.”

“Hopefully, for people troubled with difficulties, our story can offer the sort of hope and support that would get them out and running again.”

NOTE: This article has been updated.