Hungry Ghosts: Sending my dead grandfather the car he requested in a dream

My father had a dream that he was sitting in a movie theatre, his mother to his right, and his father a few seats over, in an aisle seat: his preferred spot.

“That’s why their urns are on the aisle,” my dad explained, referring to the niche where their ashes are kept, high up on the columbarium wall, but on the very edge. Members of my family standing in front of my grandparents’ niche.

In the dream, my grandfather told him that he wanted to buy a new car.

“Well, then buy one. What kind of car?” my father asked, ever blunt.

On Monday afternoon, two months later, I was sitting with my parents, uncles, aunts, half-brothers and sister inside the temple at the Po Fook Hill Columbarium, a picturesque complex built into a steep hillside in Sha Tin. My grandparents died about 14 years ago, and this was the first time since their funerals that my family had burned paper offerings (or joss paper) for them.

My father – who, by Hong Kong standards, is not all that superstitious or traditional – took the dream as a sign from his parents that it had been far too long since he and his siblings had paid their respects. 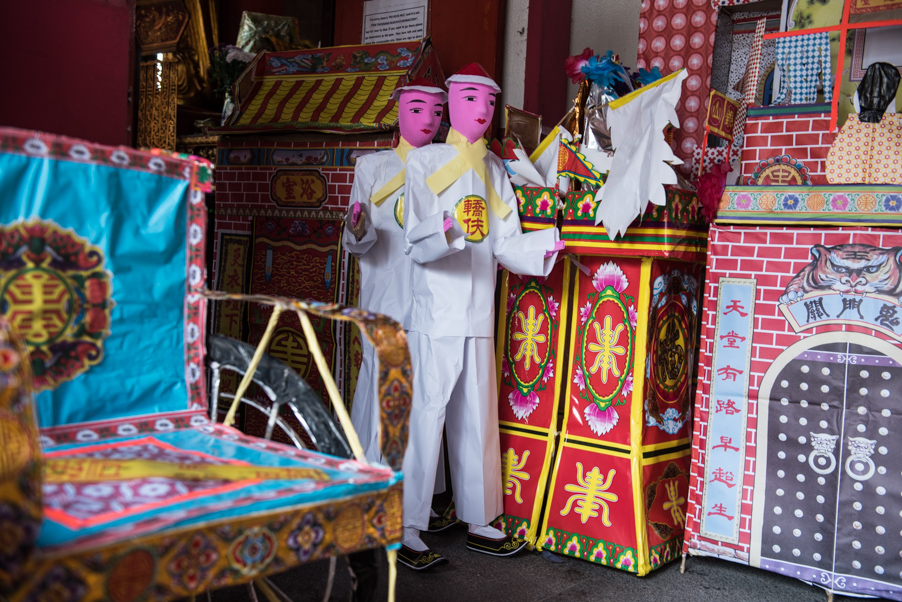 Offerings in the form of a wheelchair, servants and houses.

Joss paper – traditional Chinese offerings that symbolise all the material goods one might need in the afterlife – is burned for one’s deceased ancestors. As society modernises, so do the dead: now, one can buy paper offerings in the shape of the latest iPhone model, private jets, pets, and the finest whiskeys. Cement burning in honour of my grandparents.

Maybe, my dad said, his parents were poor and suffering in the afterlife because of their lack of offerings. Jolted by his dream into performing a full demonstration of his filial piety, my father uncharacteristically pulled out all the stops for a Taoist “dazhai” ceremony, during which one sends blessings – both spiritual and worldly – to one’s ancestors. A peek inside one of the paper house’s floors.

The seventh lunar month (around August this year) is known in Buddhist and Taoist traditions as Ghost Month, with the Ghost Festival, or Hungry Ghost Festival, landing on the 15th day (Aug. 28, 2015). On that day, it is believed that the gates between the realm of the dead and living are open, and the deceased pay their descendants a visit.

Though the date for my grandparents’ dazhai ceremony was actually planned around the columbarium’s and my relatives’ availabilities, the fact that it happened to occur around the Ghost Month meant that it would be considered extra effective. The paper representation of the car my father dreamed about.

My father ordered a HKD24,000 package deal from the columbarium, which included a ceremony performed by five monks and a traditional musician, regular joss paper, and contemporary offerings to symbolise servants, houses, mah-jong tables (my grandmother was a big gambler), box fans and, of course, a car as requested.

The custom-made paper car – over two metres long and a metre wide, complete with a chauffeur – cost an extra HKD3,000. My father decided that it would be unbecoming to send one’s own father an older model car than his own (a “500” series) – so the model of the specially made paper car was actually “SU 500”, and not “SU 450” as specified by my dream-Grandpa. The head monk bows down in front of the temple’s altar.

“Maybe he meant an SUV,” mused my sister.

“Look! SU is the airline code for Aeroflot Airlines!” exclaimed my uncle, scrolling through Google search results, as we took turns guessing what the enigmatic “SU 450” meant.

“Maybe we should just apply for a personalised ‘SU 450’ license plate,” suggested my half-brother.

“And then what, burn it?” responded my other half-brother. The monks read from Taoist scripts.

For three hours, the monks and nuns performed a complicated ceremony in the name of my grandparents inside the columbarium temple. They chanted Taoist scripts that sent messages of good will from the living, listing all of their descendants’ names, and sang as a man played traditional instruments. The head monk standing on the table inside the temple.

At different points, the old, wizened head monk would change his robes and hat, sometimes kneeling on the ground in front of altar, sometimes standing or sitting on the table. The monks and nuns chanting at the door of the temple, overlooking Sha Tin.

At the appropriate times, us relatives would offer three sticks incense and bow according to their instructions – “First bow. Second bow. Third bow.” – our eyes stinging from the smoke. Each descendent stuck three sticks of incense inside the urn at key points in the ceremony.

The atmosphere was casual and jovial, and it was more like a relaxed family gathering more than anything as we sat a table inside the temple while the monks conducted the ceremony.

One aunt brought a cake from Maxim’s, the box emblazoned with the words “Let’s celebrate!” while one half-brother would duck in and out of the hotel to answer emails on his laptop. Folding silver and gold taels out of joss paper.

“You should email grandpa and tell him to expect a package!” joked my uncle.

We passed the time by folding traditional joss paper, decorated with metallic squares, into gold and silver taels; the temple provided much more paper than several diligent pairs of hand could assemble within a few hours. A monk leading the family procession to the furnace.

Finally, for the grand finale, it was time to burn all of the handcrafted offerings. Workers carried the replicas to the furnace, and a monk led the family members in a procession.

My half-brothers lit the first symbolic flame, and we were told to stand back as the staff threw them in, piece by piece. The fire engulfed every offering seemingly instantly, with the flames metres-high and the heat remarkably high even several metres back. In went the mah-jong table.

A monk told us to shout as the offerings were made: “Here’s a mah-jong table, Grandma! We’re sending you a car! Grandpa, a house is coming!” The car after the paper had all burned away.

Feeling a bit awkward, and perhaps a bit stifled a little bit by the formidable heat coming from the furnace, our yells were lacklustre.

When it was all finished, the monk chastised us: “I was shouting more than any of you!” The inclined elevator and the stairs leading down the steep hill from the columbarium.

We made our way down the hill, some taking the stairs, others taking the anachronistic “inclined elevator” (like a dinky version of the Peak Tram), and went our separate ways, the smell of incense lingering in our clothes for the rest of the day.